UNUSUAL TOOTH Problems? May be caused by secret weapons experimentation. Are you a TARGETED INDIVIDUAL?

Greetings:
Has anyone else had problems with their TEETH since they realized they had become a Targeted Individual?
When Petra and Myself lived in Hell’s Kitchen Rooms at 330 West 51st Street in Manhattan, a known notorious government ‘safe house‘ where innocent and unsuspecting tenants are put under data gathering surveillance and are then used as human guinea pigs in diabolical ‘science-fiction’ like ‘human exposure’ tests of deadly microwave, nano-technological, biological, social and psychological weapons and related systems and procedures.

Why would a secret black-ops faction of our military-industrial complex spend millions of dollars doing insane sounding things to and running tests on ordinary people in a top-secret training and experimentational ‘playground’ they have carved for themselves from the very fabric of ‘normal’ life in midtown New York, Hell’s Kitchen?

Why not? It appears that certain factions of our government, our scientific, our military, our intelligence, our social services and our law enforcement communities have ‘gone over to the dark side’ possibly under the spell of some ‘New  World Order’ ‘End of the World’ scenario. And where else are they gong to be able to test the effectiveness of these weapons and systems they are developing on unsuspecting people? These weapons include the human mind and imagination and the weapon holders are learning to dramatically shape the thoughts, the feelings, as well as the imaginations of the people of the World in the greatest social manipulation agenda of all time (in my opinion). And so, to test these weapons for the New World Order war against the freedom of thought and action of humanity both myself, Timothy Trespas and my friend Petra Schiller were selected to be victims of this scientific torture. We were ‘expendables’ or so it seemed from the actions of those involved in experimenting on us. And it became clear, that nothing we could say or do would change the unbelievable insanity we were forced to undergo.

In this posting I raise the issue of dental health among Targeted Individuals. I have found both Petra and myself have suffered rapid uncountable (in ‘normal’ terms) dental decay, pain, problems and tooth loss. These dental troubles and pain I correlate directly with the many elements of the devices, substances, energies, foods and situations (stress) we were forced through or exposed to.

Our small room in the hotel at 330 West 51st Street was being sprayed through the cracks in the floor around the walls (they had moved our walls!) pretty much round the clock by what appeared to the eye to be a whitish mist. This mist had the properties of stinging the skin at times. For a period this mist seemed to have turned all of our skin yellowish. It would wash off and out of our clothes and also shred our clothing (slowly) and plastic bags (rapidly).
On top of the chem-trail-like misting we were also exposed to a flood of crazy bugs and we had morgellons like fibers growing from the skin for a short period.
Also the entire room was covered in a silver-whitish-black dust. I believe this dust has the capability to be addressed speck by speck (think smart dust – which is what we called it). It covered our bodies and we breathed it in. It also collected in the mouth. Now, besides the crazy tiny barnacle like insects that latched onto our teeth (and did what?) we also had the smart dust.
I saw black decay looking stuff within a few weeks and all my back teeth became rotten while they were covered with this dust. As I mentioned the dust can be addressed and moved with considerable force using some type of technology. The effects feel like a huge static field.
(Petra called it the ‘vandergraph generator’.)
The hair on  your body stands straight-up and you could feel the air charged with the energy and a tension, that also made you feel nervous, tense and angry increasing in that order depending on the strength of the field. There seemed to be a resistance in the air indicating the presence of some kind of magnetic field, that made it hard to breathe or to move through it. It was infinitely more difficult to manipulate objects while this energy field was present. For example while bending wires one had to literally wrestle with them to get them to move.
(Once the machine that generated this field ‘blew up’ in the night. I heard a klaxon siren downstairs and two large explosions, then the field went away. I breathed a huge sigh of relief feeling, that I would be tortured considerably less that night)
Using both the ‘vandergraph’ and the ‘smart dust’ (it was every where!!!) our tormenters were able to move the walls in our room back and forth.
This was accompanied by a large resounding “wu wu wu wuuuuu“ sound, that seemed to shake the entire building.

At least part of the objective of this treatment was to scare us and to make us believe we had lost our minds, especially when these absurd scenarios were combined with covert drugging using high doses of psychoactive LSD-like compounds or exposure to some kind of electric stimulation of the nervous system capable of mimicking the effects of such  a drug. In such a situation Petra would best-case-scenario laugh it all off and tell related stories from her life. The Grimm’s Brothers fairytale of the moving bed rolling noisily down the stairs accompanied by howling ghosts in the haunted hotel was one and then there was her favorite: the story of her father daring her and her sister to take a ride on the “Geisterbahn” with him at the carnival when she was a little girl. During the ride he explained exactly how the ghost effects are done, which one would come up next and when – “surprise!”- a brand new ghost hit from out of left field he would exclaim: “Oh my, I don’t remember that one from last year!” To understand how even the most bizarre effects are created and that they are orchestrated and manipulated by human beings and not supernatural in origin was very reassuring and reduced the mystery, the confusion and the scare effect to a fraction of their initial impact. And drugs, well they all wear off after a while, you just ride them out! Most satisfying was to her the knowledge of having frustrated our malevolent tormenters, when they could see, that their scare tactics had failed miserably. However, this triumph of having figured out a complicated scenario was mostly short-lived. The long term effects of stress, our declining health due to exposure to multiple toxins, biting and boroughing insects, other disturbances of all kinds and the mental and physical pains they caused did finally wear us down.
The smart dust could move objects in the room. It could pull plugs out of their sockets, cause me to ‘wrestle’ with wires as though they were alive.
This nano-technology smart dust was also put inside our mattress. The mattress ‘lumps’ would literally ‘move’ underneath us as we tried to get to sleep and throughout the night, which made it almost impossible to find a comfortable position and caused many aches and pains in the back.
Petra and I called it ‘the Kraftmatic Adjustable Bed’. She would try to go with the flow and ‘ride the wave’ of mattress movement while it would make me so crazy.
In the case of our teeth this smart-dust-vandergraph combination could wiggle our teeth around in their sockets and cause REAL PAIN! 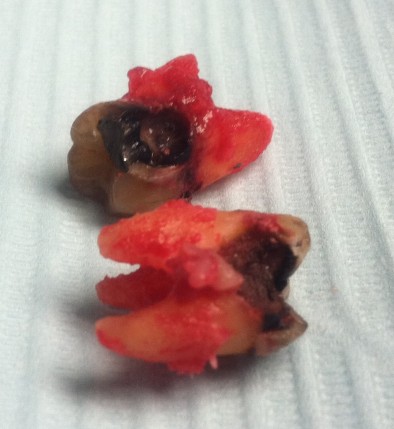 Petra would  scream nightly!
I tried to record a video of it because I thought I could SEE my teeth move. I sure felt them move.
Petra’s teeth were effected worse than mine, possibly because she had lived there 4 years longer than I had.
First all her front bottom teeth sort of broke off and crumbled out within two weeks.
(She takes daily good care, brushing after each meal, flossing and water pick, mouth wash etc.)

Then, after she was blessed to be able to have those repaired, one of the insects that would borough into the skin and lay eggs that would grow got in her mouth (these insects were put in our room by the millions and seemed to be targeted to our DNA) and all her lower front teeth (a piece of four connected crowns) fell out again.
She was blessed to have them repaired once more.
Now all of her left top back bridgework has broken loose and despite repeated repairs, she is now reduced to using Fixodent to hold in the bridge.
She has since lost another crown in the rear top right.

I just had two molars on the top left removed due to this decay-
(Video on youtube if you love gore… http://youtu.be/iO2KjJHOdrU ), and am looking at the possibility of losing many more of my teeth in the future.

My teeth seem to have been weakened by a combination of exposure to toxins, electromagnetics, sub and hyper sonics, smart dust, nano-technology, irradiation, foreign DNA, parasites, manipulation of diet, vitamins and minerals, constant drugging with unknown hallucinogenic, hypnotic and other compounds daily for years  etc.
Has anyone else had problems with their teeth under any questionable circumstances?
Blessings and peace!

I am a victim of human experimentation MK-ultra mind control Morgellons nanotechnology syndrome & remote neural connectivity. I am an artist, inventor, musician, thinker, lover, human being who cares for all humanity & all life. I believe people should endeavor to live in peaceful cooperation rather than brutal waring survival of the most brutal. We live in a forced false-paradigm and I desire to wake people up from the 'trance hypnotic mind control programming' to the 'TRUTH of light and love'! Blessing and peace. Justice to all who suffer under tyranny. Compassion for all beings. May GOD have mercy on us all.
View all posts by Timothytrespas →
This entry was posted in TOOTH TROUBLE: Problems with mouth, teeth, gums, or throat, as reported by TARGETED INDIVIDUALS: Victims of non-consensual, state-sponsored, secret human experimentation into coercive technologies and and tagged 330 west 51st street nyc, human experimentation, microwave weapons, Mind Control is HERE NOW and being used on entire population in the USA and abroad. embedded microchip marking of all human assets via bio-nanotechnology is real, possible, and being done to us as we , nanotechnology, new world order, nwo, smart dust, targeted individual, teeth, timothy trespas, torture, weapons testing. Bookmark the permalink.

17 Responses to UNUSUAL TOOTH Problems? May be caused by secret weapons experimentation. Are you a TARGETED INDIVIDUAL?